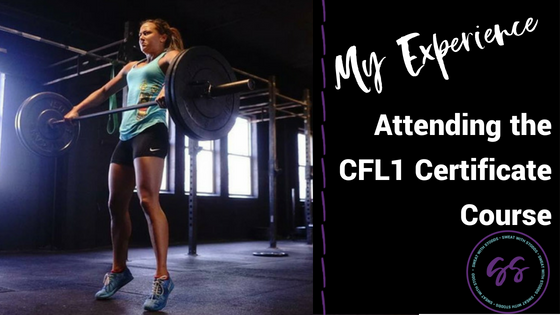 *Disclaimer: this blog post is a high-level overview of my personal experience. No details about the format and content of this course will be disclosed.*

At just about four years into my CrossFit journey: I finally bit the bullet and went for my CFL1. To those who don’t know what that means, it stands for CrossFit Level One, and it’s a certificate course that provides introductory education on the fundamental principles and movements of CrossFit.

So, why four years in did I decide to pursue it? It’s something I’d thought about more than once as I started to grow as a CrossFit athlete. For one, I loved the discipline and confidence I gained through CrossFit and wanted to share that experience with others.

Then, once I became an NASM personal trainer, I knew I would have to take CEU’s (i.e. continue my education) to keep my certification active. Since all my NASM studying occurred at home, on the internet/with a book, I wanted my next endeavor to be an in-person seminar, like this.

As I started to look into the certification further, I saw that the CFL1 course was being offered in Charlotte shortly after my move. Something that had deterred me previously was the cost: not only is the course itself $1000, but it’s typically offered in bigger cities (aka, not Syracuse) so I would’ve incurred travel expenses on top of it. (Sometimes it’s really hard to justify investing in yourself, but that’s a topic for another day.) With the course coming to my city, it would significantly reduce the cost, and I was out of excuses. It was time to dive in!

Here are my biggest takeaways from the weekend I spent at the CFL1 course:

So where am I going from here? I hope to use this experience to improve as a coach and as an athlete. I plan to take what I’ve learned about myself (just how much my weight ends up in my toes/midfoot when I move) to improve my own form and grow as an athlete. And I plan to use the techniques, methodology, and cueing I learned this weekend to coach others into their fittest selves. Who’s with me?!