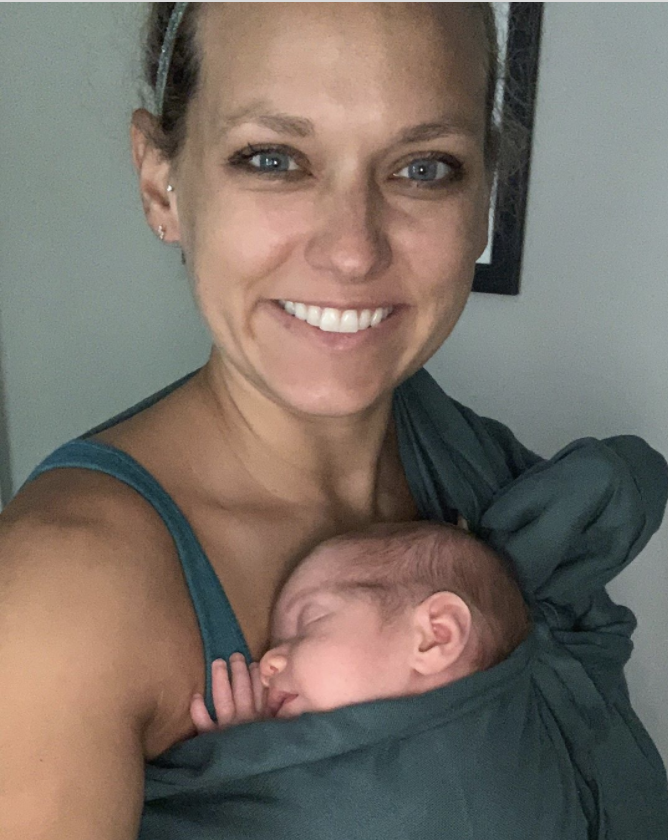 I welcomed my first child on July 29, 2020. This is the story of how she entered the world! If you prefer video, I shared her story on IGTV (linked below). If reading is more your thing, scroll on!

First things first: what was our birth plan? There are mixed opinions about having one. Some will say “kids will do what they want to do, so what’s the point”? But, as a first time mom, I wanted to go into the situation feeling informed and empowered, so I opted to make a loose “birth plan”.

My plan/hope was to have an unmedicated birth: spontaneous labor, no pain meds, and a vaginal delivery. This was for a few reasons:

I knew there was a chance that birth would not go the way I had “planned” but after doing my research and putting thought into it, this was the experience I was hoping for.

Stella was due July 20, 2020. When I first got pregnant and was given my due date, the Doctor told me they don’t let patients enter a 42nd week of pregnancy, and they would want an induction scheduled by 41.5 weeks. Fast forward to my due date and Stella did not arrive. Since I didn’t want to induce if at all possible, I scheduled an appointment for 4 days after my due date, where I would get an ultrasound to check on her development and my amniotic fluid levels. She still hadn’t come by then, so I went to my appointment. The midwife I saw told me everything looked good, but they still recommended induction at the 41 week mark. This meant I had a few less days than I expected (as the Doctor had said 41.5 weeks). She asked that I come in 2 days later for cervical ripening, which would be followed by labor induction the following day (at exactly 41 weeks).

I was so surprised by this suggestion since I had just been told that everything looked good for me to continue on with my pregnancy. But since a medical professional gave the recommendation, I went with it and scheduled an induction. Long story short, as soon as I left the office I didn’t feel right about it and called back to push back the induction date 2 more days. We then got to my induction date (July 28) and I still didn’t feel quite right about moving forward with induction, so I again called to switch my appointment. I scheduled a non-stress test on July 29 to determine if I could continue with pregnancy rather than an induction. It may sound like a lot of back and forth, but I was proud of myself for advocating for what I wanted. I was trying to give Stella every opportunity to come on her own.

Mind you, I was very ready to be done being pregnant – just not enough to compromise the hopes/plans that I had in place. This means I spent a lot of time trying every natural labor induction technique out there. Eating dates and pineapple, drinking red raspberry leaf tea, walking (5+ miles/day), sex, nipple stimulation (I used my breast pump). Since none of these things were too taxing to do, I had no problem doing them daily, though I can say from experience that none of them worked 🙂

Anyway, after all of the induction drama, on the night of July 28, around 7PM my contractions started (seems like Stella had heard that her induction was scheduled to start on July 28 at 8PM and she waited until the last minute to make sure she tried to exit on her time!). The contractions started off pain-free, but felt like a consistent tightening in my stomach about every 10 minutes, so I started timing them (if you are in your 3rd trimester I highly recommend downloading a contraction timing app). By 9PM, they were getting closer together and became uncomfortable, so I started laboring on my birthing ball. My husband knew we could be in for a long haul, so he suggested we go to bed and try to get some sleep. We headed upstairs to our bedroom, and I called my OBGYN to ask if trying to sleep would slow down labor. They said I could try to sleep but recommended a warm bath and taking tylenol first. I took the bath then laid down and realized the contractions had become far too uncomfortable, there was no way I could sleep through them. When I called the OB, they also said I should call back when my contractions were coming every 6 minutes for more than 2 hours. From 10PM-12AM, I had painful contractions every 6 minutes or less, so I called back and they told me to head to the hospital.

Labor at the Hospital

When we got to the hospital, things moved pretty slowly due to the pandemic. We usually would have had valet service so we could get straight up to our room, but Colin had to drop me off, then find parking and come back into the hospital. We also had to have our temperatures checked and fill out paperwork sharing that we did not show symptoms. This all took quite some time, so I didn’t get up to labor and delivery until 1AM and my contractions were getting worse and worse.

When we got up to labor and delivery, Colin was sent to the family waiting area and I was sent to triage where to get checked for dilation. It took about 15 minutes for the nurse to come check on me in triage, in which time I was by myself and starting to get EXTREMELY uncomfortable. The contractions had reached a 9/10 on a pain scale and were coming every 2-3ish minutes. I was having very uncomfortable bowel movements (and had been since I was at home), and I was exhausted as I neared 24 hours without sleep.

When the triage nurse arrived to check me, she found that I was 4cm dilated and asked if I wanted an epidural. I said no, but also told her I was potentially reconsidering given the level of pain I was in and knowing that at only 4cm dilated and running on empty, this was becoming really challenging. There is no “estimated time” to get from 4cm to the full 10cm of dilation (where you have to be in order to start pushing). Knowing this and knowing the pain wasn’t likely to get any better, I opted to take the epidural, even though it wasn’t in my original plan. I was surprised to make the decision because the pain outweighed my fear of being numbed, but in the end, I know I made the right decision for me at the time.

Once I agreed to the epidural, I was moved to my own labor and delivery room and Colin joined me there. The anesthesiologist came to administer the epidural (closer to around 2AM). As soon as the epidural started working, I no longer knew I was having contractions, which was helpful so I could try to rest. They were being monitored using a strap around my stomach, so we could see when they were coming, I could just no longer feel them. Stella’s heart rate was also being monitored using a strap around my stomach.

A few minutes after I was given the epidural and got settled in bed, the room suddenly flooded with people. I didn’t know it at the time, but Stella’s heart rate was dropping during some of my contractions (from about 160/170 bpm to 60ish bpm). The nurses flipped me onto my side to see if her heart rate would pick back up, and it did for a bit. The thought was that maybe the umbilical cord was getting pressure in the position I was in, and moving me would relieve that pressure allow her heart rate to come back up. Unfortunately, her heart rate continued to drop during later contractions. About an hour into this happening, the Doctor came in, broke my water and placed a monitor on her head to see if we could get a better read on her heart rate. She explained that if this dip in heart rate continued, she would need to call for a c-section. I understood, but was hopeful that if we continued to shift my position everything would be fine. Around 4AM, the doctor came back and made the call for a c-section, as her heart rate continued to drop without an identifiable reason and I was not at 10cm dilated so was not cleared to start pushing her out.

It was considered an “urgent” c-section, but not an emergency, so my husband was able to be in the room with me. It was also a blessing in disguise that I got the epidural, because this meant that I could receive additional numbing medication rather than getting knocked out for the surgery. We had a curtain up so I couldn’t see anything, but cutting her out was a very quick process. She was taken, checked and cleaned by the nurse, and I was told there was nothing identifiable wrong. We don’t know why her heart rate was dipping. Then she was given to Colin and me as I was getting sewn back up. Seeing her for the first time was a mixed bag of emotions: nerve-wracking, exciting, beautiful.. and so much more.

As sad as I was to have the experience stray so far from what I was hoping for, it was more important to me that my baby was healthy and in my arms. It was still traumatic and has taken a lot of processing on my end, but it helps to remember that birth is one small part of having a baby, and I have a lifetime of happy memories to make with this girl!

What was your birth experience?